Human and Effect We Have on Space, or: Consequences of (Future) Footprints on Mars

As people starting the space age, human are moving outside their small bubble of earth, venturing into space. With this, the responsibility range is going wider as well, not only for our enclosed space, but also going beyond and beyond as far as we travel.

Human has been sending artificial objects orbiting around earth since 1957, started with Sputnik 1 of the Soviet Union. Since then, our research advancement has gone far until we have a lot satellites with different objectives, ranging for communications, space and earth observation satellites, reconnaissance satellites, until, although not as their main function, space tourism.

As there’re problems with managing waste on earth, there are also problems with managing waste on space. As of 2014, there were about 2000 commercial and government satellites orbiting the earth. With more and more satellites we send and older ones that’s ceased to function, management is needed as we don’t have waste facility in space. For example, one satellite is destroyed each year on average.

As it is, there’s a very convenient way to dispose these space junks. Our atmosphere, which are very useful already for sustaining our life on earth, can be utilized for helping us getting rid of things we don’t need on space. A nuisance in sending people and things we want from space back to earth, atmospheric drag and aerodynamic heating happening from re-entry will make these unused satellites cease to pieces. The problem with this method, that although it’s working for the most part, there’s a possibility that a large piece still remains, crash into earth and causing damages, and the leftover pieces turning into space debris.

Talking about the danger of space debris, it is to be expected to think that the bigger-sized debris to be more dangerous for space stations because they can dent or destroy the stations when they collide with the stations. According to NASA’s Orbital Debris Program Office, there are more than 21,000 orbital debris sized larger than 10 cm, while the particles between 1 and 10 cm are estimated to be 500,000 in numbers. That’s not mentioning the number of particles smaller than 1 cm, which exceeds 100 million. Based on NASA scientist Donald J. Kessler, if the density of objects in low earth orbit (LEO) is high enough that collisions between objects could cause a cascade, each collision generating space debris which increases the likelihood of further collisions. This can make our activities in space to be put in halt. As the LEO is unfeasible anymore, people need to have satellites in different orbital ranges such as medium earth orbit (MEO) or geo-stationary earth orbit (GEO), whereas LEO is the most commonly used orbits for both manned and unmanned space vehicles.

All hope’s not loss because the solution for this issue has been discussed. The Federal Communications Commision (FCC) for example, requires that all geostationary satellites launched after March 18, 2002 to commit moving to graveyard orbit, super synchronous orbit far above synchronous orbit, at the end of their operational life. That will solve the Kessler Syndrome, although avoiding the problem of resulting space waste. A laser broom, land-based laser in multimegawatt range has been proposed to deorbit debris so that the debris changes eccentricity so that it reenter the earth atmosphere to be burnt up.

Space exploration is going further and further until there come stage of us not just sending satellites on vacant interplanetary space. We have sent landers to planetary objects, sent human to space, and sent landers with human on board to one planetary object, the Moon. With astronauts in space, there are other interesting factors to be considered, such as waste produced by astronauts in International Space Station (ISS) or support systems to keep astronauts in lunar missions arriving safe and sound in their destination.

Because the ISS are orbiting around the earth, we can also utilize the atmospheric re-entry for disposing the waste produced in the station. Ranging from human waste until dirty clothes, all unneeded thing will be crammed inside waste disposal vehicle such as Cygnus or Albert Einstein Automated Transfer Vehicle (ATV), to be let burn by the fiery atmospheric drag. This method can also be utilised for satellites we send on planets with atmosphere such as Mars. In the other hand, this disposal method can’t be utilized for missions going to outer space, such as Pioneer 10, Voyager, and New Horizons. As they have been moving further and further away from the sun, even if there’s collision, the remains will still be there as proof of our endeavour to learn about space.

There were a lot of equipment needed to ensure landing missions to the Moon which plenty weren’t needed in the journey back. The famous Apollo Mission’s astronauts, Buzz Aldrin and Neil Amstrong has left more than 100 items on moon before they left back to earth, including four urine containers, several airsickness bags, a Hasselblad camera, lunar overshoes and a complete moon-landing step. The problem with trash on the Moon can at least be relieved by the fact that it doesn’t have the ability to support life. Although there are more than 100 tons of scrap metal and plastic on the surface of the moon, ranging from Soviet Lunik 2 space probe until the golf ball hit by US astronaut Alan Shephard, we can ensure that they won’t result in bacterial contamination. They will be preserved on the Moon surface, ready to be visited in the future. 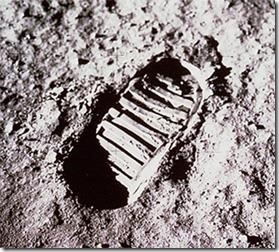 Figure 3 Footprint of Neil Amstrong, The first footprint on the moon that will be there for millions of year (NASA)

With the increase of evidence of Mars at least once habitable and possible for life existed or still exist there, in its subsurface interplanetary contamination is an issue worth considering. Planetary protection, a principle to prevent interplanetary contamination from earth (forward contamination) and to earth (back contamination) has been started with the establishment of Committee on Contamination by Extraterrestrial Exploration (CETEX) (1958) by US National Academy of Sciences (NAS). It was then continued by COSPAR (Committee on Space Research) (1959) to ratify Outer Space Treat to five categories differentiated by sterilisation needed by space crafts and landers depending on their destination ability to support life. The Moon with inability of sustaining life, need no precaution, except for documentation, putting it in category II.

Landers searching for life must be very clean, categorized as IVb, and the higher category, IVc, which is designated for areas where water might be flowing. The discovery of water on mars, which increases the possibility of life on mars, complicating this. Curiosity, the IVb rover which is in Mars already, and has the biggest opportunity to study more about dark slope streak which are highly related to flowing water, wasn’t prepared for this kind of research, which fall under category IVc. The fear of it carrying bacteria from earth that may still be alive, which increase the risk if the bacteria contaminating Mars if it goes to those wet areas.

Although NASA’s Jim Green suggesting that ultraviolet radiation on Mars would dismiss the contamination from earth organisms, report from US National Academy of Sciences and European Science Foundation stated that the effect of radiation couldn’t dismiss the effect of the dust attenuating the radiation. The future rovers to land in Mars should have all of the sanitation condition prepared before, such as the closest one, ExoMars. ExoMars joint mission’s crews weight this in their rover preparation. Alberto Fairen and Dirk Schulze-Makuch however, suggest that all these precaution aren’t necessary because even there’s possibility of us contamining Mars, it probably has been contamined valready by earth meteorites, with Catherine Conley and John Rummel opposing with the basis of lack of earth meteorites on Mars, the impacts from earth for sending microorganisms to Mars is pretty infrequent. For planetary protection, it will be wise to continue this cautionary sanitation.

Lifeforms from earth can potentially surface in Martian extreme conditions, such as arctic permafrost lichens with its ability to live without water and relying on humidity of the atmosphere and its resistance of UV radiation. There is also deliquescence, with its right mixture and humidity to support liquid water warm enough and cold enough to both support live and not evaporate into Martian atmosphere. If we allow contamination to happen the risk of us not being able to separate between organisms originated from earth and original organism will be very high. There is also risk of organism from earth overpowering the native organisms. As we are planning for manned landing missions, we need to be wary of the possibility of organism contaminating resources needed for future human manned missions. There are also other factors to consider for manned mission. The manned mission for Mars in the future, for example, is very challenging, because it’s impossible to sterilise human, with its full microbiome compared to fully sterilise rovers, increasing the possibility of forward contamination to the destination.

With the amount of missions sent to Mars until now, it is suggested that this contamination has been happened on Martian surface because of our rovers, dormant because unsuitable condition for them to metabolise. Other than the rovers deliberately sent, there were other suggestions of possibility of contamination on Mars. The Category III Mars Climate Orbiter, for example was a failure, either burnt up in atmosphere or crashed on Mars, raising issue of forward contamination. There was also the Category III Mars Observer. Other missions, such as Beagle 2, were hard landed onto Mars complicating the issue for planet protection as well. As we discussed before in more missions to Mars, we need to also consider the disposal of defunct Mars orbiters. Ethical Considerations for Planetary Protection in Space Exploration workshop recommended to extend disposal to maximum lifetime of possible dormant micro-organism as contamination prevention.

As most of the solar system appears hostile to life, no activity of life for billion years, the possibility of these spacecraft contaminating any kind of life form out there is very small. Exceptions other than Mars, for example, in our solar system are Europa icy surface, salt watery Enceladus, or the possible liquid water on Titan. Extremophiles, or organisms that can live in extreme environment, can contaminate those such places because of us, and foreign life could then be introduced and thriven or the existing life form if any will be affected. As more and more advancements in our space programs happening, knowledge of place where life might exist or be sustained, there will also be more discussions, on things we have or haven’t discussed before. How about planetary mining? What if the organisms we find in the future originates from earth because of the contamination?