Anyway, I did send quite a lot of postages back then, and finding this chart pretty useful. It’s a chart of Indonesia’s Universal Postal Service Rates (the most friendliest set, price-wise. Non-EMS, untracked, haha). It is the chart in IDR (Indonesian Rupiah). Right now (when I’m writing this, ofc) 1 USD is about Rp 13.000,00. Usually I just round it up to 15000 or down to 10000 to make calculation easier in my head.

Ministry of Communication and Informatics, Regulation No. 29 of 2013: Universal Postal Service Rates (Standard. Above: Global, Below: Domestic, with left: Same province, right: different provinces) (source: denissapostcard.wordpress.com). I believe Zone I is including ASEAN and Zone III is including West Asia/ Middle East. Not that sure, really.

Actually this post is more for me saving the chart above, but it’s rather inadequate post for that alone, so let me continue with rough information for Indonesian postal service? The national postal service is PT Pos Indonesia. The website is http://www.posindonesia.co.id/. Although it’s all in Bahasa Indonesia, you can get a rather informative “English” version just by using Google Translate, so hopefully helpful enough. There you can track postage,  find the nearest post office, finding zipcode (Indonesia Only), check standard postage tariff (Indonesia Only), check weselpos tariff (sending money), abroad weselpos, and sending money through Western Union.

Indonesian mailing address generally follows this kind of scheme/ format (basically everything ordered from the smallest to the largest, with numbers behind names)

(More can be read in this rather informative file or this article) (The part under () can be omitted, but if your house is like mine, one without street name and house number (REALLY), RT/RW information is really helpful to at least know the vicinity of where the house located)  (this is a rather interesting blog article about RT/ RW in Indonesia)

You can also calculate domestic rate using this form (posindonesia.co.id/tarif/)

Opening hours for Post Office in Indonesia differ. They are usually posted near the entrance, so don’t worry too much. Basically they are open in normal working hours, closed on Sundays and holidays, except for the main offices (infoperistiwa.com).

If you’re not sure, just check. If you’re really determined, you can just go to bigger ones, or straight to the main office (for real, the one nearest to my house is closed on 14.00. I usually just go to the main one near the Sultan Palace).

Opening Hours for Main Post Office of Yogyakarta Province, 2014 (Note: I remember that it’s open on Sunday on 2015?)  (thephintya.files.wordpress.com)

Other than normal/ standard (surat pos biasa) postage service ( Actually, for sending stuff abroad, one lady in the counter had told me one time that it’s actually easier to process normal postage, because less checking and stuff, the package will just be put straight on the aeroplane, basically) PT Pos Indonesia also does EMS (global, 3-5 days not including customs, tracked, 230 countries), PaketPos (package, standard domestic/abroad, express, and special request), PosExpress (domestic, tracked, fast (there’s same day and next day service)), and Pos Kilat Khusus (domestic,  two days service for province capital, and four day service for regency capital). If you’re into philately, you can also use the philately booth, mostly available on bigger/ main post offices (You can also print stamps with your photos/images of your choice there). Be careful that it closes quite early though (I forget, maybe 16.00?)

Using PT Pos Indonesia, you are expected  not to send things which’re not permitted in the airport, such as liquid, living animals, gas, inflammable chemical and substance. Those restrictions includes food and drinks. So, if you want to send your friends food, use other postal service, or send packaged, mostly dry food items.

As it’s not as common for people to send letters today as yesteryear, nowadays PT Pos Indonesia also offer services such as printing (Admailpost), sending money (and other monetary services) paying electric bills and monthly pension payments there. Not only about decreasing number of letters, competition for PT Pos Indonesia is also inenvitable, with services targeting domestic market such as JNE and Tiki, and services for sending package abroad such as TNT, DHL, UPS, Fedex, and other services operating in Indonesia such as expedition. Though its competitive rates is very helpful, better and better service is expected to give edge from their competitors.

The main (and only) colour scheme of the postal service is orange and the logo is a globe with dove flying in front (postal dove, really).  The colour is almost everywhere within the brand, the post box is orange, the postman’s motorbike and uniform is orange. Although the offices are not painted all in orange, it’s rather easily distinguishable by big amount of orange decorating them. (OK, have just realised that it’s maybe inspired by the original Dutch-mail colouring scheme. Have just visited and there’re a lot of orange postal boxes there as well) 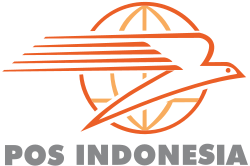 Although I used to complain about the price rate for sending packages abroad, the rate was actually pretty friendly, especially the postcard rate. Even my friend from Germany was impressed by the relatively cheap price for sending postcard to Germany (and worldwide). And how I am not sending a lot more postcards back when I was in Indonesia, that’s for me to wonder, really.