I don’t know why, seems like my writings lately are mostly about maps? I wonder… Anyway, tonight and yesterday night were the peak of Perseid Meteor Shower this year (mostly yesterday, but today should be quite fine). As I live far from civilisation the city this year, the result of the quick sighting I’d done last night was quite nice. Though I didn’t venture far from the flat, I could see a lot of shooting stars (basically the shower part) coming from the east (where Perseid was located these time of the year before the dawn), and I believe there’s a fireball too!

Anyway, the point of this writing is not just about the meteor shower (which is nice already), but mostly about these dark-sky maps people share, like darksitefinder and International Dark Sky Association, or my favourite, Light Pollution Map. Surprise surprise, although the place where I live now’s pretty village-ish, it’s actually still pretty bright, according to dark site finder. Maybe it’s because its proximity to London, which is as everyone’s guess, bright white. Even my house’s Indonesia is better! I thought I live in the countrier side than my original house, guess it’s not.

It’s 6 from the right, the dark orange. My Yogyakarta’s jouse, however is in yellow zone

Fun thing with the International Dark Sky Association Map, however, it’ll give you the nicest place to observe the sky. In my current location, it means South Downs National Park, “A Bronze-tier International Dark Sky Reserve in Sussex and Hampshire, England, established 2016.”, which is 40 km far from where I’m writing this now. Hmmm, with my condition now, I don’t think so. Based on the dark site finder map, though, the National Park is in the bright green zone still.

And it doesn’t even have any from Indonesia! Hmmmhh! (Okay, justified because I don’t think the coverage’s good enough. I think other than places in USA and EU, I only caught places in Namibia, South Korea, Australia, and New Zealand). I think Light Pollution Map is more accurate, not only that it incorporated VIIRS latest pollution map, the radiance result is better I think (my place now 0.4-1 nW/cm2sr, my house in Yogyakarta is 1-3 nW/cm2sr ) 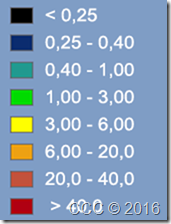 Let me sleep a bit before catching Perseid meteor shower again before the dawn. If you live in the city CITY and couldn’t see anything (though I believe you can at least see a few), a nice streaming.