← Cute Souvenirs in Oxford
Specks of Indonesia in the Solar System →

So, compared to Earth, which is mapped often already, and the Moon, which has been fully mapped using NASA”s Lunar Reconnaisance Orbiter, Mars hasn’t been mapped as often. The highest resolution global topographic map of Mars until now is produced using MOLA data (Mars Orbiter Laser Altimeter), which, although pretty precise in altitude, only has the resolution of about 463 m/ pixel. But! Based on MOLA data alone, there are a lot of interesting Mars maps in different style being produced. Basically this post was born because of me stumbled upon this vintage-style Mars map created by Eleanor Lutz a.k.a. Tabletop Whale. I knew that there are a lot of interesting (data-wise and style-wise) maps on Mars, so I will share a few I can think of.

(Update: She has also created a set of planetary and astronomy related map including a new Mars one)

Here There Be Robots: A New Map of The Planet Mars

This map was made using USGS color-coded map of Mars and with crater names obrained in Gazzetteer of Planetary Nomenclature. The style of the map itself is a reminiscense of old explorer’s map. Other than craters, we can also see a few interesting landmarks, which are position of Landers on Mars. She drew the map by hand before scanning them, salute! If you’re interested you can buy the map as well.

Have you read John Carter of Mars? People are trying to make a map of where’s where based on series of books set on Mars  authored by Edgar Rice Burrough. Mars, which in the book is called as Barsoom (“the eight planet”, if you calculate Sun, Mercury, Venus, Earth, Moon, Phobos, Deimos as separate “planets”). The series has inspired a lot of would-be-planetary scientists to study about Mars, not to mention budding and veteran cartographers. Even Carl Sagan himself rumoured to have a Barsoom map hanging in his office (and definitely has talked enough about it, like in Cosmos). In this article I attach Barsoom Map I like the most, however.

This one’s pretty new! Ordnance Survey is mapping agency of Britain. Usually it maps earth, but it produced this Western Arabia Terra contour map, with ExoMars Landing Area in Oxia Planum being superimposed on it. The map is scaled in 1:4000000 scale, using equidistant cylindrical projection with a style usually reserved for earth map. This map is also based on MOLA data. So, if you’re planning to visit Mars in the near future, this map can be used to estimate your journey (maybe just for the flight route?). This is available in print as well. 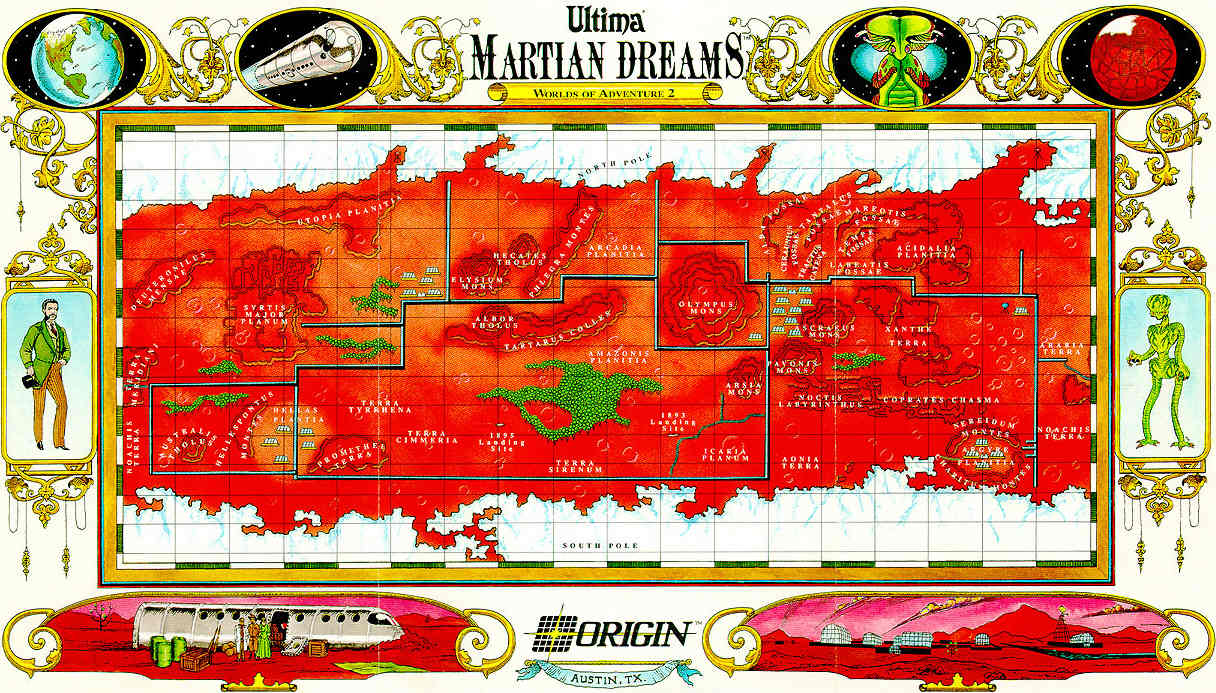 I have  never played Ultima games before, but Ultima World of Adventure 2 Martian Dreams is apparently set on Mars. The game is set in year 1895, and the map is supposed to shows the geography of Mars as it existed in that year, including the canals and approximate locations of the forests. The starting location of the game is 27o S, 146o E, which now is located around Terra Cimmeria. You can see in the map that the maps shows plana, terrae, chasmata, and montes (source).

Have you read/ watched the Martian? The Martian is a story about astronaut Mark Watney’s adventure to go back to Earth after being stranded on Mars. In the story, he’s traveled from Chryse Planitia to Schiaparelli Crater. Along the journey, he’s traveled across MC11E (eastern part Oxia Palus Quadrangle), which DTM (Digital Terrain Model) had been produced by DLR (German’s Space Agency). So. what a cartographer-moviegoer need to do? Make a map of the journey, of course (link also has video)! You can see the topographic map above. MC11 is between 0-30o and 315-345o, so it’s larger than MC11. The DTM was made using HRSC (High Resolution Stereo Camera), which resolution varied between 12.5-50 m/ pixel. The MC11E DTM itself has the resolution of 50 m/pixel. You can also look at other topographic maps made of HRSC images like in this 1:200000 topographic map of Iani Chaos below.

This map is produced by National Geographic in 2011, titled Destination Mars.  The map itself is made by Michael Caplinger and Michael Malin of MSSS based on MGS, MOC and MOLA data, with a scale of 1:2740000. The big map is in Winkel Tripel Projection with Positive West longitude which is not the norm nowadays, while the poles are in the usual Polar Stereographic Projection. Interesting notations are end of seasonal frost lines and locations of satellite crashes. You can also buy.

There’s also older National Geographic Martian Map produced in 1973, titled The Red Planet MARS. It’s produced by the Cartographic Division of National Geographic Society. The projection used for each is Lambert Azimuthal Equal-Area, for the equatorial map, centered in longitude 0o, 120o, and 240o, all in Positive West. The map is scaled on 1:28600000. Interesting features are nomenclature written in capital, based on naming system of Schiaparelli (1877) and a few geographical “information”.   Two of the places where you can still buy.

2003 USGS Topographic Map of Mars. Using Mercator Projection centered in 0o (until 57o) and polar stereographic for poles (55o and above), showing both Planetographic and Planetocentric Latitude and Longitude. Rainbow colourised, with a scale of 1:25000000 in the equator. It’s made in GMT, which is a whoa because how to do it?  Names are based on IAU Gazetteer of Planetary Nomenclature. Basically all the mapping information is written very nicely with references.

You can also have the Contour Map version

and behold, the MAT version

A part of Planetary Maps for Children Series (There are Venus, Moon, Io, Europa, and Titan too) projected in Lambert Azimuthal Equal Area Projection, scaled in 1:21100000. Also available in multiple languages. Also featuring Phobos and Deimos in the background. You can also have it in rotating spheres version. Also available as Google Earth kmz layer. The control panel is very thoughtfully made as well, with Mars information. You can also buy prints. What else to ask.

I really like the aesthetic in this imagination of Mars in AD 1930 where there is water on Mars by sapiento@Deviantart. In the map we can see that Mars is being colonised by German Empire, French Republic, United Kingdom, and United States. Sadly the maker doesn’t really put information of the making and the sources he/ she used.

This Mars gravity map is pretty interesting as well. Reds and whites are areas with higher gravity and blues are lower gravity. The map was derived using Doppler and range tracking data collected by NASA’s Deep Space Network from three NASA spacecraft in orbit around Mars:Mars Global Surveyor (MGS), Mars Odyssey (ODY), and the Mars Reconnaissance Orbiter (MRO) using about 16 years of data. With the map we are able to see gravity anomalies as small as about 100 kilometers across, and determine the crustal thickness of Mars with a resolution of around 120 kilometers.

There’s one of this map in my office! (You can also buy). Made by Tanaka, K.L. et al (2014)., the map is available in different jpg sizes and also in PDF. The poles are in Polar stereographic, scaled in 1:20000000 at lat 90o and the lower latitudes are in Robinson Pseudocylindrical Projection, the same scale at latitude 38o. The geological informations are very detailed, the colour coded map has a paragraph long explanation for every colour (codec 44 geologic units), there are also information of 12 linear features,their morphology and process origins. Let me just quote

This global geologic map of Mars, which records the distribution of geologic units and landforms on the planet’s surface through time, is based on unprecedented variety, quality, and quantity of remotely sensed data acquired since the Viking Orbiters. These data have provided morphologic, topographic, spectral, thermophysical, radar sounding, and other observations for integration, analysis, and interpretation in support of geologic mapping. In particular, the precise topographic mapping now available has enabled consistent morphologic portrayal of the surface for global mapping (whereas previously used visual-range image bases were less effective, because they combined morphologic and albedo information and, locally, atmospheric haze). Also, thermal infrared image bases used for this map tended to be less affected by atmospheric haze and thus are reliable for analysis of surface morphology and texture at even higher resolution than the topographic products.

The map was made over 7 years and incorporated data from NASA’s Mars Global Surveyor, Mars Odyssey, Mars Reconnaissance Orbiter and ESA’s Mars Express. It’s also an update for previous geologic map published in 1978 and 1986(Source) . Basically this map equals to whoa.

Observing Mars Through a Telescope (Source)

This simple equcylindrical map would help you knowing what’s what when you have a nice telescope to look onto Mars.

If you don’t have enough money to buy globe I mentioned in this article, you can made them yourself using a tennis ball by printing Viking Globe or MOLA Globe

Talking about MOLA, this English, Hungarian, Bulgarian Map was made based on MOLA Data aswell. I really like the shading here.

also in Bulgarian is this hydrology map of Mars. Whoa, they’re really productive in producing Maps.

Those are just a few of interesting Mars Map there are, real and fictional. (like a lot of the map here. Stumbled upon this toponymy site while looking for Schiaparelli’s Map). A lot of science-fiction medias are based on future-Mars, proto-Mars, and Terraformed-Mars, each having their own interpretation of our solar system Mars. As more and more is known about Mars, and more and more detailed map of the surface is produced, the future of driving on Mars surface with GPS will come closer and closer, we hope.

Sources: everything in the linked links, http://www.travelworldmaps.com/mars-map/ who’s putting most the images but not the sources. http://www.erbzine.com/ which has a lot of maps https://planetarymapping.wordpress.com which has a lot more interesting Mars maps than you can imagine.

← Cute Souvenirs in Oxford
Specks of Indonesia in the Solar System →