← Indonesia’s Postal Service Rates
20 Things About Me (Or, Maybe Your World Does Evolve Around You) →

Movin’, movin’! (If somebody gets the reference)

So, as for the record-keeping articles I write, I’m now talking about my Kobo. So, after a few months having T1, I was basically addicted to ebook reader. I was tempted by this ad to buy a Kindle PW2 (don’t ask, it’s mostly because I wanted the frontlight, Pocket integration as an afterthought as well), because the price was quite okay (nooot really). I ended up buying the Kindle that time. After I bought the Kindle, there’s an ad for Kobo Glo, I was more into Kobo than Kindle, and the price difference was about IDR 700.000, cheaper than normal Kobo Glo price in Indonesia. So, because You Only Have Kobo Ad once, after a fruitful negotiation with the seller (He had 3. I wanted the black one, but only the white one left. I almost booted but he offered lower price for that), I got the Glo (and regretting the PW2. Fortunately, months after keeping it on the shelf, I decided to sell the PW2). It’s a really nice device! Though the back rubber is supposed to be non-slip feature, it’s definitely catching up fingerprints, and you can’t put sticker on the rubber part! (a.k.a. me and my tendency to transparent-sticker my gadgets)

At first, I’m not using the Glo much. Sure, the frontlight was very helpful, every reading experience is far more superior, and it’s so quick compared to the T1, but 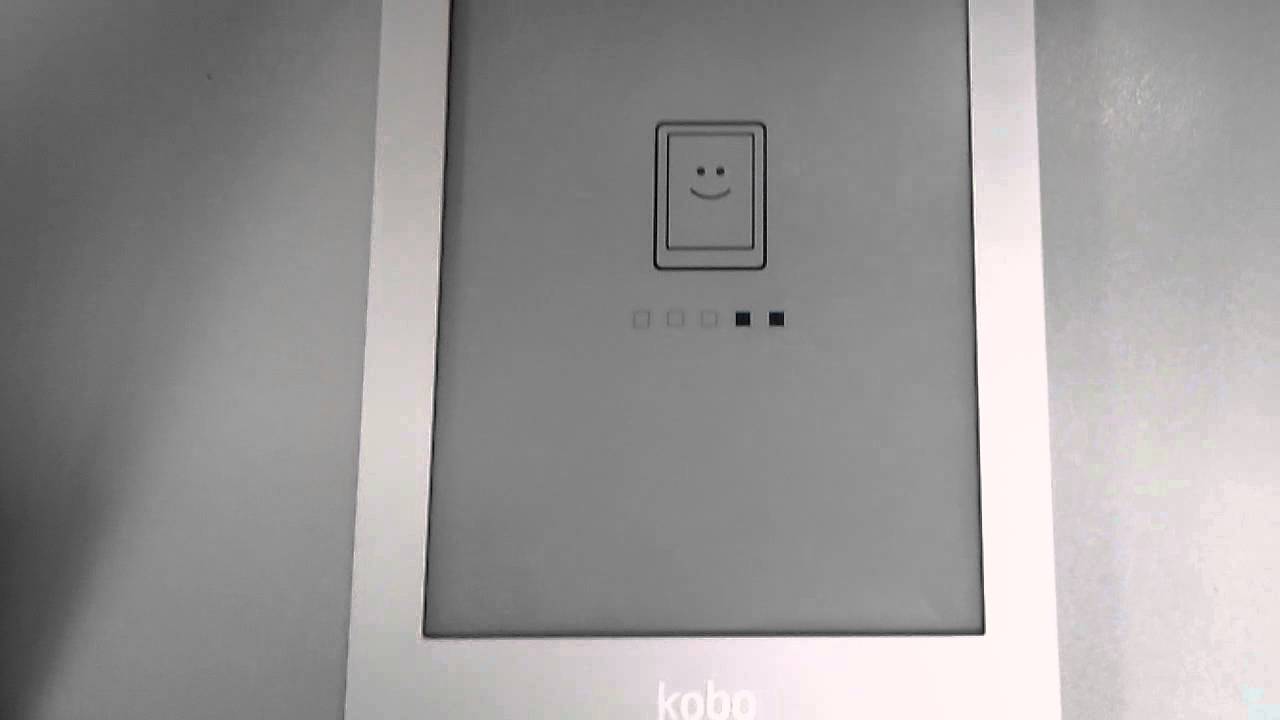 When mine died, it didn’t have the smiley face

Anyway, before the fateful day of my Kobo getting bricked, I knew some tinkering to do with it, such as installing alternative reader and basically changing the internal memory from 2 GB to 4 GB or changing it with a new, bigger capacity SD-card, but I didn’t try them for I afraid to brick the device. I tried my best to stand the loading wait everytime I load new books, but, in that one time… it gave me four unchanged black squares instead of “white squares” with moving blacks signaling it loading. After I tried to plug it and force-reboot it, it still failed to boot. I was really afraid that I had bricked my Kobo (and yes, I did). But, after I asked in MobileRead, I could load a new image into the SD Card and revived it. I didn’t have the image, but I was given an image by a MobileRead user (thanks, if you read this), and open my Kobo, that time or never, there I went.

(As someone who has experienced this, please back up your reader image before tinkering!! You can use any program, such as USB Image Tool, Win32 Disk Imager, or UltraISO (free trial is no prob))

Basically there’re two versions of Kobo Glo, 2 GB one and 4 GB one. They’re being shipped with 4 GB internal memory (not all though), which turn out to be a micro-SD card. So, you can just make it 4 GB by opening the Kobo and tinker with the micro-SD, or change it to a bigger capacity and put your e-books in the internal memory to avoid the “getting bricked” future.

How to do it? Because as far as technology progressed, people hate screws more and more in their gadgets (blame Apple who started it, I think), now their producers just make the screws hidden and the gadget harder to open, you need to jam a corner in the top of Kobo Glo, slowly open it, before being able to separate the front part and the back cover. I opened it and there it was, 4 GB card. I formatted it to it destined 4 GB capacity. I put the image I obtained into the SD Card, put the SD card back, voila it’s alive again (or you can do it with bigger SD card to make the capacity bigger, which I regretted not doing that time. I didn’t have bigger SD card other than the ones I put in my phone and my T1, which were more important for me that time).

(If you’re an Kobo Glo owner and feel interested, just go through this tutorial. It has everything, step-by-step, photos for illustration)

That aside, because of the side-loading problem, I didn’t use the Kobo that much, until I think just last year, I’d just had the inisiative to install KoboStart Menu, KoReader, and CoolReader), and make Nickel secondary (other than opening really heavy PDF, which KoReader sometimes don’t support, and changing the clock after escape reboot). That changed my reading life, because with this setup, I can load a lot of books inside the micro SD card and put them in hidden folders (which KoReader and CoolReader detect and Nickel doesn’t). And using folder-based management to put my ebooks, and there goes my problems. So, I phased out my T1 and used my Glo more (Edit:the END, but not really).

Edit: Because I had two readers and only bringing one anywhere, I just use my T1 case for when I bring my Glo outside (which, although bigger, but rather fitting so it’s alright). I made a case from a cheap diary I bought to make a hidden book case (that abandoned), and just put elastic (that’s far bigger and rather unfit). After looking at this site, you know that you can at least fit a Kobo Glo inside covers for other devices (ones with elastic corner straps, not the surefit ones) such as

Anyway, as covers and cases are rather expensive (especially if you want a fitting one, in Indonesia, moreover, when you can’t even find the device), I tend to not buy cases. But! ebay! is my saviour! Basically these Embrace series has popped a few times in ebay auction (I think… about 2 months?), as it’s a right fit, I ended up auctioning and won two, for average 1/10 of the price written on the website.  It’s rather fortunate because 2 cases after mine the auctions stopped.

Although it’s not really a perfect case in my opinion (at least appearance-wise it’s really my style, and QUALITY), I’m pretty much happy with it now.

(My perfect ebook case characteristics for this Glo are:

Update: I moved to 1st Gen Aura because I broke my Glo screen. Downside’s that you couldn’t tinker with the micro SD card, upside is that it’s smaller and the screen is flushed with the body so no dust-prone reader. Get a bargain for this Aura 2 case in dark blue, which’s a faux-leather (water-proof), with magnet for auto-sleep. Other than the ended-up-not-so-nice hole for the original Aura 2 button in the back, I’m very happy with it, as I put elastic to make sure it closes nicely and cut a hole in the bottom for the micro-USB plug. I don’t think it will last as long, but for now it’s pretty much perfect.

← Indonesia’s Postal Service Rates
20 Things About Me (Or, Maybe Your World Does Evolve Around You) →